A foundation of stone

…musing on a place called home…

I live in a house that the ground is trying to suck into the footprint and return this old hilltop to what it once looked like 200 years ago. Yes, that’s right. I said 200 years. That’s how old my old house is – okay, in 2015 it’ll be 200, but honestly, it’s close enough to call it Really. Darn. Old. The ground is not winning.

It’s somewhat amusing in a ‘not sure if I should cry or laugh’ kind of way when I had the place appraised, and the guy was just astounded by the un-squareness of the building. I’m used to there not being a single plumb corner or a ceiling line that’s straight and true. They don’t exist in my world of plaster walls and lathe. The stairs lean off one way. The floor droops here and bows there. I took a picture of my kids in front of the Christmas tree and they were all nice and neatly sitting up tall and proper. The doorframe behind them is canked to the right at an alarming angle that shows up quite drastically. The appraiser made a point to mention in his report that he wasn’t a structural engineer, but it sure seemed to him like the place was going to fall down from all the leaning this way and that.

Of course, he was wrong. That was years ago and well, the place is still standing. I’m not an engineer either, but I’ve lived here most of my life (-15 or so years elsewhere) and the angles haven’t changed. The four chimneys still lean and sometimes go one way for a few years before easing back the other. The ground moves around here and the house moves with it. Did the builders back then know somehow to leave a little swaying room?

The earthquake here took out the Washington Monument and the National Cathedral. 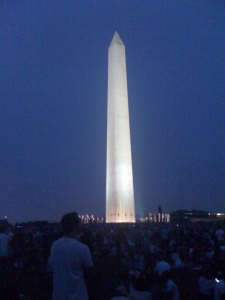 My place sits between the epicenter and D.C. and not a single piece of plaster came off any ceiling or wall. I rushed home afraid I’d find all four chimneys in shattered pieces, or the whole place aflame because of the propane tanks directly under all those bricks, but no. It was all well and good, undamaged and sound, sitting on a foundation of stone, of bedrock and maybe some other kind of strength that came from those who built it the old fashioned way, felling the trees and pulling the stones out of the ground by hand. It was built by the same people who helped build and create this country – some historically tough folks who hacked their way through endless forests to carve out a place to take root and raise a family and a nation. Somehow, they imbued the wood and the rock with a potency that endures to this day.

It is a living, breathing thing, this strength, and for reasons I don’t understand imparts to me a sense of the same, a desire to never let go. Never give up. Endure, because it’s possible to do so with beauty and dignity and grace standing atop a hill, looking over this small corner of the world. Can an old wood house really have some sort of mystical sentience? Ask the generations who’ve padded through these halls and down the crooked stairs.

I hear them at times as willow-the-wisps floating by on a cool summer night, the mist on the meadow, saying yes. They tell me as they walk the stairs, yes, this home is made of strength and as long as you stand by it, it will weather any storm, any upheaval of the good earth, anything time has to throw its way. Care for me and I will protect you from the elements, always. Yes, I say. The ghosts know. Strength endures.

Filed under Life as a writer

4 responses to “A foundation of stone”

This site uses Akismet to reduce spam. Learn how your comment data is processed.